He even acknowledges that one day in the not too distant future, Cult Marketing Inc., the Powell advertising and marketing shop he started in 2004, may not exist.

Doug McIntyre is an ad man and marketing guy who isn’t sweating the fact that he isn’t getting as much advertising and marketing work as he used to.

He’ll still have a business, but it’ll be a twist on the field where he’s made his career.

XRS Research started two years ago as a side business to Cult Marketing but has grown to account for the majority of revenue in the office, a trend CEO McIntyre said he doesn’t expect to abate. 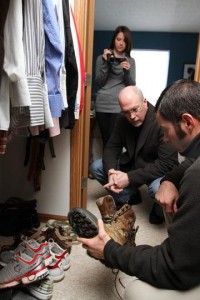 Janet Adams | Business First Mike Fresch, dark hair, shared his closet and his thoughts on his Rocky Boots with XRS Research, the consumer research arm of Powell-based Cult Marketing. XRS CEO Doug McIntyre, glasses, says the research portion of his business has become the lion’s share, and eventually might become the entire business.

“Our view on the whole (ad and marketing) world was that the traditional model is suffering,” he said.

Research has always been part of the Cult Marketing pitch, and it’s an area of expertise McIntyre has pursued through much of his marketing and branding life. But what began as an added service now seems poised to become the whole business.

Companies have tightened budgets in the past two years and are searching for ways to spend wiser, said Alexis Yamokoski, director of research. One common cut is to bring outside advertising and marketing work in-house.

“Cult wasn’t what everyone was looking for,” she said.

Abbey Klaassen, editor at trade publication Advertising Age, in a Jan. 10 podcast said the advertising industry will remain challenged in 2011. Firms and clients both want to add value for customers to generate more revenue.

Social media, direct marketing and digital advertising are expected to continue to be hot initiatives for most firms, she said.

But research is an area, McIntyre said, where he saw opportunity. XRS’ work has opened a new world of clients that otherwise wouldn’t be interested in the firm, namely ones that already handle advertising in-house or contract with a larger national agency. While Cult would be a competitor to the corporate or agency-of-record teams, XRS isn’t.

The business is becoming less about a brochure here or television ad there and more about large-scale research projects, some entailing hundreds of interviews across U.S. and international markets.

“It’s what the market demands,” Yamokoski said. “We’d love to do a Super Bowl ad, but those companies aren’t going to look to us.”

How they act, not what they say

Research isn’t foreign to the advertising and marketing world, but the XRS pitch is a deeper, more detailed take.

“Traditional research is just about the information,” McIntyre said. “For us, that’s pretty worthless. For the client as well. … Our philosophy about typical consumer surveys is, what do you learn? What do you do with that info? Does it really impact anything?”

McIntyre said the typical focus group includes eight participants and lasts two hours with participants speaking for an average of 12 minutes each.

“How much can you really learn from that?”

Add to that the fact that customers answering questions aren’t always reliable, even if they don’t know it.

“It’s all speculative questions,” McIntyre said. “Would you come back to buy this product? Who really knows?”

He said focus groups and the media had negative reactions to the Sony Walkman before it was released in the late 1970s, and we all know how that turned out. Another example he cites is a Whirlpool survey asking potential customers if they’d buy a specific appliance. The company revisited those who said yes one year later and found only 20 percent followed through on those intentions.

In other words, it’s not what customers say, it’s what they do.

McIntyre said it isn’t uncommon to do an in-home interview with a brand’s customer and find out that although they say they love a product, they don’t actually have it or use it.

XRS uses the traditional, such as surveys and focus groups, but also relies heavily on a number of other info-gathering means, including detailed in-home interviews and customer shop-alongs. Some projects have entailed hundreds of interviews.

XRS has a staff of nine with a few of those employees also doing duties with Cult Marketing. It also contracts with outside help when needed, including having a base of colleagues in Europe that it has used in international studies.

XRS’ biggest customer market is retailers, though manufacturers and restaurants also make up the client base.

McIntyre said only 20 percent of clients use both XRS and Cult.

Rocky Brands Inc. is one of those.

The Nelsonville-based footwear business has four key segments — duty/military, western, work/steel toe and outdoor/hunting. Its products are worn by Navy Seals and horseback riders, factory workers and outdoorsmen. It was searching for commonality among its customers.

XRS screened Rocky fans of all types to find the appropriate people to survey and conducted videotaped in-home interviews in six markets across the country. Customers were always in motion at work or play and there was a big emotional connection – it wasn’t just warmth and comfort and durability, Yamokoski said. XRS put together a video presentation for Rocky executives that impressed enough to win Cult the creative work as well.

“They make the information actionable,” said Philip Hansen, director of research and analytics for Petco Animal Supplies Inc. “With some other vendors, it’s more of a data dump. It’s a lot of info, but what do you do with it?”

The San Diego-based pet supply store chain hired XRS to study an in-store campaign. Hansen declined to provide specifics since it hasn’t been launched yet, but said the work involved both exit surveys and shop-alongs.

He said the advertising and marketing background makes the XRS data useful.

“They focused on what we could do,” he said. “Others don’t necessarily have that arm.”

The firm worked with Go Smile Inc., a teeth-whitening product company, which was testing its seven-day teeth whitening kit.

XRS interviewed target-market women about the product and watched and recorded its use. It led to a “co-creation” project where XRS assembled the women it surveyed and allowed them to design a new product and packaging, which led to real improvements.

Creative Director Kyle Hickman said shop-alongs for one client revealed the product issue to be in-store presentation and operations, not packaging as was initially theorized.

Want to join the discussion?
Feel free to contribute!